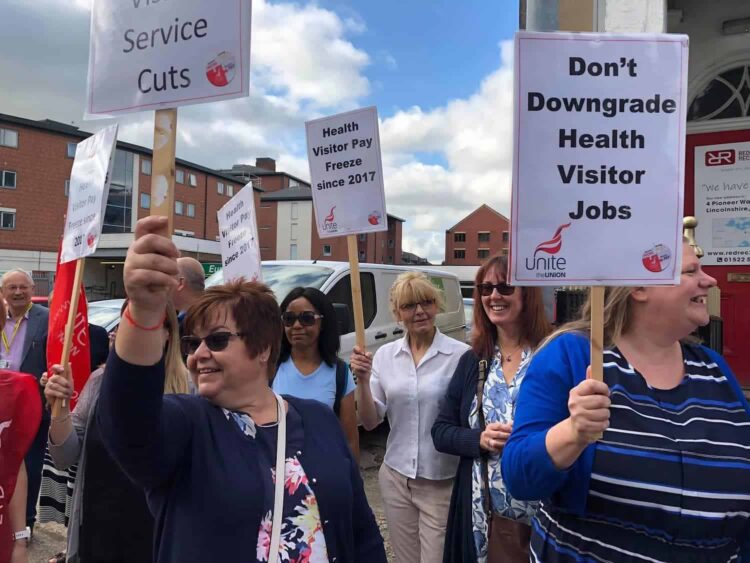 Health visitors employed by Lincolnshire County Council are stepping up their campaign this week.

Registered Nurse and Health Visitors employed by Lincolnshire County Council are currently in a dispute over pay and the erosion of professional responsibilities which could adversely impact vulnerable families.

The dispute centres on Unite’s calculation that its Lincolnshire health visitor members have lost more than £2,000 a year since they were transferred from the NHS to the county council in October 2017.

Pay parity must be guaranteed.

Unite regional officer Steve Syson said: “Our members have had tremendous support in their local communities by a public that recognises the important work they do for families and children throughout Lincolnshire.

“However, they have been met by a brick wall in the form of a council that remains intransigent, despite three meetings under the auspices of the conciliation service, Acas. The attitude of the council is immoral as it is denying our members legitimate pay rises.

“The council has proffered 30 grade 10 jobs, which they have conjured out of nowhere, that may ensure this pay increase. But these contracts are shrouded in secrecy so we don’t know what would be required from our members – it could mean a long-term erosion of employment condition. Also, these contracts are not enough to cover all of our 58 members.

“Unite remains open for constructive dialogue with the council 24/7 – but until pay parity is guaranteed for all health visitors employed by the county council our campaign for pay justice will continue.”