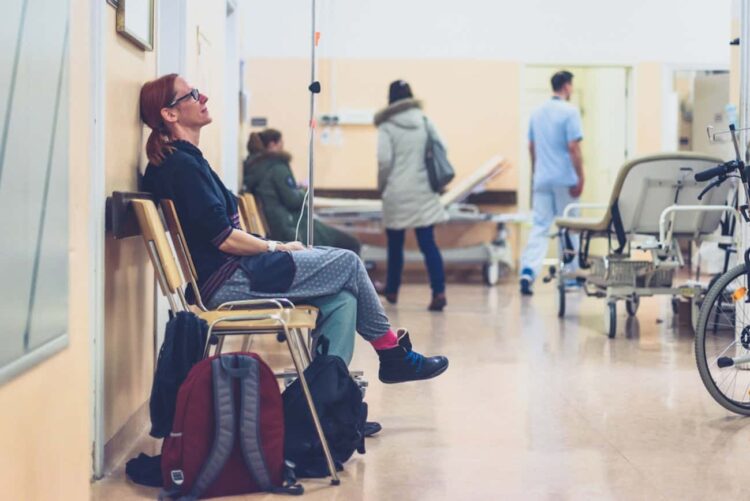 The NHS is failing to meet important A&E and cancer targets.

According to official figures, April was “by far” the worst month on record for the NHS – after failing to meet two of it’s most important targets.

Almost 70,000 patients spent over four hours waiting on a trolley to be seen, with over 400 of those waiting more than 12 hours.

The news comes only weeks before fourteen hospitals pilot new A&E targets, which if successful, could see the four-hour target replaced nationwide.

The data also revealed that NHS performance on cancer waiting times in 2018/19 is the worst since these targets were set with over 34,000 waiting more than 62 days for their first treatment.

Patricia Marquis, the Royal College of Nursing‘s Director for England, said: “People who are so sick that they need to be admitted to hospital from A&E need a bed, and nursing and medical care, urgently.

“Yet we learn from today’s figures that last month, almost 70,000 patients had to wait more than four hours on trolleys or chairs until a bed could be found, an increase of almost 40 per cent on this time last year.

“Trusts are supposed never to allow this to happen, and nursing staff find it extremely difficult and distressing to try to provide care for patients in these circumstances. However, the current unsustainable level of nurse shortages means such waits are becoming inevitable.

“Treating patients on corridor trolleys should belong to a bygone era. Ministers must stop us heading back there at all costs. It’s undignified and less safe for the patient, and compromises the professional.”

Professor John Appleby, Chief Economist of the Nuffield Trust said: “Today’s figures show that this April was by far the worst on record for the NHS, just when we would expect performance to start improving. It must feel like a never-ending winter for overstretched staff.

“15% of people attending A&E spent more than 4 hours from arrival to admission, transfer or discharge – that is the highest April figure on record. The pressure behind this is reflected in an astonishing 7% increase in major A&E department attendances per day compared to April last year.

“Nearly 67,000 patients spent over 4 hours waiting on a trolley from a decision to admit to admission in April 2019, almost 40% higher than the same time last year.

“Trusts couldn’t be starting from a worse position as new proposed A&E targets start to be piloted this month. Patients will want to know when the end is in sight – currently, that seems like a long way away.”

‘Worst year since targets were set’.

Dr. Becks Fisher, GP and Policy Fellow at the Health Foundation, said: “Despite repeated promises of improvement, NHS performance on cancer waiting times in 2018/19 is the worst since these targets were set. Last year was the fifth year in a row that the key 62 day waiting time target has been missed.

“Improving cancer survival means diagnosing more cancers at an early stage, so the increasing numbers of patients being referred to rapid diagnostic pathways from GPs is good news. But cancer services aren’t keeping pace with the rising demand, often resulting in anxious waits for patients. Last year more than 178,000 people waited longer than the recommended 14 days for a first appointment with a cancer specialist, and over 34,000 waited more than 62 days for their first treatment.

“Meeting the growing demand for referrals will require additional staff to address current shortages and investment in diagnostic equipment. But the NHS workforce implementation plan is yet to be published and there are no guarantees of extra funding for equipment in the next government spending review.

“Without urgent action, promises of improved cancer care for patients in England will ring increasingly hollow.”