Ruth May was allegedly cut from the briefing because she refused to publicly condone the actions of senior government advisor Dominic Cummings. 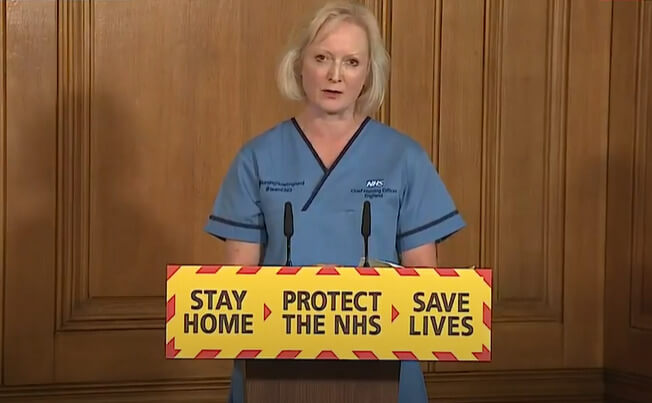 During last night’s daily Downing Street briefing a minister was quizzed on the controversial issue.

The Chief Nursing Officer (CNO) for England was reportedly dropped from a daily Downing Street briefing for refusing to support the actions of a senior government advisor.

According to a report from The Independent, Ms. May was cut from the briefing because she refused to publicly condone the actions of senior government advisor Dominic Cummings.

A senior NHS source told the newspaper; “A No 10 spad [special adviser] asked her directly how she would answer the Dominic Cummings question and she refused to play along and told them she would answer the same way as Jonathan Van-Tam. She was dropped immediately from the press briefing.”

Mr. Cummings caused controversy after making a 260-mile round trip to Durham from London during the lockdown despite experiencing symptoms consistent with COVID-19.

NHS guidelines at the time stated; “To protect others, you must stay at home if you or someone you live with has symptoms of coronavirus (COVID-19).” Emphasising; “do not leave your home for any reason”.

A NursingNotes poll reveals that 96% of healthcare professionals believe Mr. Cummings broke the lockdown rules, with a massive 98% saying they followed the rules despite finding themselves in a similar situation.

She will be back again.

During last night’s daily Downing Street briefing a the Transport Minister was quizzed on the controversial issue.

A journalist from the BBC asked; “Is it true, and do you think it’s right, that the chief nursing officer Ruth May is either unwilling or unable to attend these press conferences anymore because she won’t defend Dominic Cummings?”

Grant Shapps, the Secretary of State for Transport, responded; “I don’t think it is true. She’s attended many times before. At the top of the Number 10 Twitter feed, I see one of her tweets pinned. She has been a regular contributor before, and I’m absolutely sure she will be back here again.”

Dr. Jonathan Van-Tam, Deputy Chief Medical Officer, has allegedly been dropped from the daily briefings for the same reason.

According to The Independent, Ms. May was also due to appear at the start of June but missed the briefing due to traffic delays.

When asked by The Independent to comment, Downing Street said it strongly denied the claims that Ms. May had been dropped over her views and added that health and scientific advisers would continue to take questions in the briefings.

While Ms. May has experienced almost global praise for her alleged actions, she has not made a public comment on the issue.