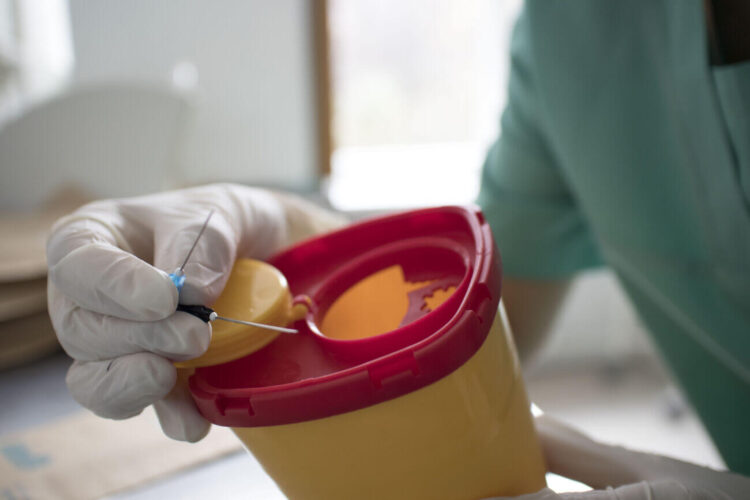 Figures suggest there has been a 50% rise in needlestick injuries.

Pressures of the pandemic and a lack of training have led to a 50% rise in needlestick injuries, a Royal College of Nursing (RCN) report suggests.

Sharps injuries are where a needle, blade (such as a scalpel), or other medical instruments unintentionally penetrate the skin.

Nearly two-thirds (63%) of the 7,571 RCN members asked said they had received at least one sharps injury during their careers.

Fatigue and a lack of training.

A quarter (25%) of mental health unit staff sustained sharps injuries in the last 12 months, as did 22% of care/nursing homes staff and 18% of patients’ homes staff.

Fatigue tops this list of reasons for injuries with more than a quarter of nursing staff (27%) citing it for a reason and more than 1 in ten (12%) saying staffing levels contributed to their injury.

Even after injury less than half (48%) attended a follow-up meeting and 40% reported not receiving any medical advice.

The report found that wearing personal protective equipment (PPE) was considered a contributing factor by 9% of staff.

Some way to go.

Rose Gallagher, RCN Professional Lead for Infection Prevention and Control, said: “All nursing staff who work with sharps should have training in how to use them safely.

“In 2013 new regulations were brought in to reduce sharps injuries but these findings suggest there is still some way to go to protect all parts of the nursing workforce.

“We now need to see greater efforts for better reporting and training to not only prevent injuries but to ensure there are stronger procedures to follow-up and protect nursing staff after injuries.”