The report highlights that gender stereotypes are a "major factor deterring male students from considering nursing". 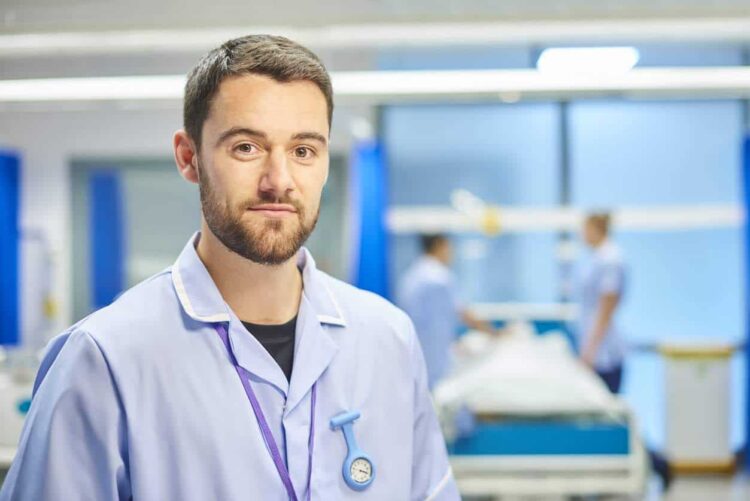 Perceptions of a “feminine” profession are detrimental to the recruitment of men.

Universities in England should “set targets” in order to boost the number of men in the nursing profession, according to a new report.

The new report called Male participation in nursing and allied health higher education courses by Research Works on behalf of the Office for Students, highlights that 90% of student nurses are female.

Differences between specialities were noted with men making up 24% of students on mental health nursing courses, 9% on adult and only 3% in paediatrics.

In comparison, 39% of physiotherapy and a massive 43% of paramedics students are male.

Claiming that gender stereotypes are a “major factor deterring male students from considering nursing”, the report reads; “both research phases highlighted cultural perceptions of caring work as feminine and the experience of a female-dominated workforce as significant barriers to considering nursing.”

One student commented; ” “I think it [nursing] is a girly job. It is mostly women in that kind of job. It is not the kind of thing that I would go to.”

Barriers into the profession.

Other barriers related to perceptions of low pay and status, as well as concerns over high workload within the NHS, further deterred many male students from considering nursing and allied health professions.

Media representation of professionals was also shown to influence a students decision about a profession with programmes. The TV shows such as ‘24 hours in A&E’ were noted as prompted some students to apply to paramedic science.

The authors make a set of recommendations to tackle the barriers into the profession and boost the total number of men in nursing.

The recommendations include; ensuring career information “appeals to both genders”, developing a “coordinated strategy” to recruit more men, developing mentoring programmes, ensure university recruitment days are “gender-sensitive” and promoting the core message that “healthcare careers are about skills, not gender”.

They also suggest that universities and colleges could “set targets and develop initiatives to increase male participation in nursing”.