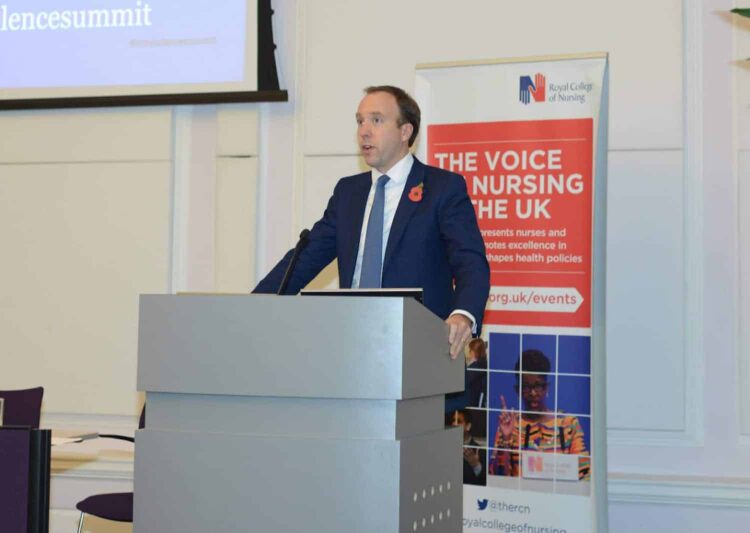 The health secretary has said he would be “happy to look at proposals” on enshrining safe staffing numbers into law.

Matt Hancock, the Secretary of State for Health and Social Care, has admitted he would ‘consider’ the implementation of safe staffing legislation in England.

Royal College of Nursing members quizzed the health secretary on key issues during the college’s summit to announce the clampdown on aggression towards health care staff.

During the questions and answer session, the health secretary was asked if he would look to enshrine safe nurse staffing levels in law, Mr. Hancock replied; “I’m very happy to look at proposals around that. The need for safe staffing is vital of course,”.

In a statement following the summit, Mr. Hancock warned that safe staffing legislation could come with “unintended consequences”.

Before finally adding; “I wouldn’t rule out legislation but let’s keep a close eye on how it works in Wales and in Scotland, if they do bring it in, and keep the discussion going.”

A spokesperson for the RCN said: “We were very pleased to hear that the Health Secretary appears willing to consider enshrining safe staffing levels in law, and especially pleased that he made the remarks while at our summit on attacks on staff last week.

“If he is serious about tackling staffing levels, we look forward to working closely with him to work out how legislation, plus sufficient funding, could ensure safer care for patients in the future”.

The RCN has published Mr. Hancock’s answers to other key questions that were submitted by members.