Health Minister says ‘hospitals have seats’ for patients with no bed

The Health Minister told Parliment yesterday that ‘hospitals have seats’ for patients who don’t have a bed.

UPDATE: Mr Dunne has since resigned from his position as Health Minister.

Mr Ashworth, accused the government of failing to address increased pressures in the NHS after NHS England announced last week it would suspend all non-urgent care and remove financial penalties for some targets, such as single-sex accommodation.

But, Mr Dunne told Parliament that ‘most hospitals have seats’ for patients who can’t be found a bed in an emergency.

Parliment heard reports of patients lying on the floors of hospital corridors as they waited to be treated. Similar conditions were seen in the NHS last year, after which, the Red Cross declared a humanitarian crisis. 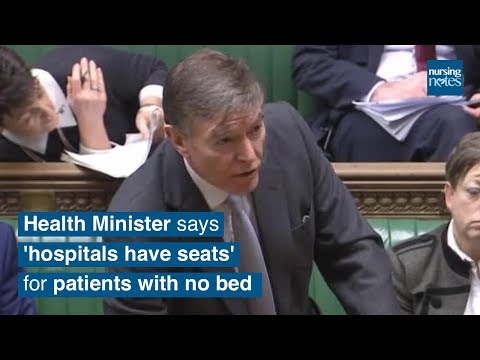 Mr Dunne went on to proclaim that the NHS “has a crisis of some sort or other” every winter, but the government was better prepared than in previous years.

“When asked about patients sitting on floors in hospitals because there are no beds or chairs available to them the only thing the Tory Health Minister could say was that there are chairs – woeful response to the NHS winter crisis.”

“This is an appalling and ignorant remark from a minister entirely out of touch with the reality of the NHS winter crisis.

“Placing sick patients in chairs because of acute bed shortages is clearly not acceptable in the 21st century. And yet with numerous trusts this winter at times reporting 100% bed occupancy, hospitals simply cannot cope and are being forced into these intolerable situations.

“Patients and staff are currently facing an unprecedented winter crisis. Instead of worrying about reshuffles, the prime minister must urgently sort this mess out.”

Mr Dunne responded to the criticism on Twitter by posting the following statement.

Statement to clarify comments made in the House today pic.twitter.com/7Y6JVIitlX

Despite an ongoing NHS crisis Jeremy Hunt was promoted to the Secretary of State for Health and Social Care after reportedly ‘pleading’ with the Prime Minister to say in health.