Mr Hunt said he was 'inspired' by many amazing doctors and civil servants at the Department for Health and Social care.

Jeremy Hunt has been awarded ‘Humanitarian Award’ at the World Patient Safety Summit for his global leadership on patient safety.

The Health Secretary, Jeremy Hunt MP, was given the prestigious award during a ceremony at the 6th Annual World Conference on Patient Safety yesterday.

Previous winners of the award include; President Barack Obama, Vice President Joe Biden and Dr. Patrick H. Conway – all of whom worked tirelessly towards free and equal access to healthcare services in the US.

Every year the Patient Safety Movement Foundation identifies the most influential advocates in patient safety and honours them with the Humanitarian Award at the annual World Patient Safety, Science and Technology Summit. This award recognises leaders who have made significant progress in eliminating preventable patient deaths – aiming towards a shared goal of zero by 2020.

During the summit, Mr Hunt announced various initiatives to improve patient safety, these included a crackdown on drug errors and a plan to eliminate the strict hierarchy in healthcare which is preventing nurses and junior doctors from speaking up. 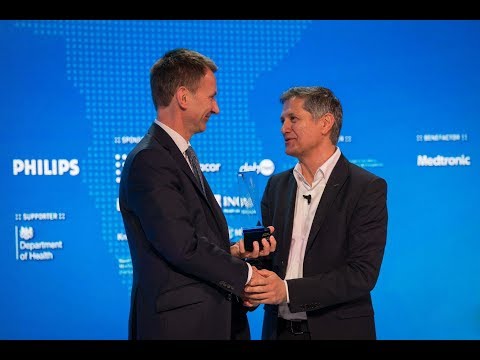 Mr Hunt said he was ‘humbled’ by the award and claimed he had been ‘inspired’ by many amazing doctors and civil servants at the Department for Health and Social Care. Mr Hunt added he accepted the award on behalf of the patient campaigners who lost their loved ones and pushed forward better patient safety.

Campaigners have taken to social media to criticise the award after it was announced last month that the NHS is ‘haemorrhaging’ nurses, as for the first time in recent history more nurses are leaving the profession than joining, and senior A&E consultants raised concerns over patient safety as ‘patients are dying prematurely’ after being nursed in corridors.

“Since 2013, Jeremy Hunt has worked tirelessly to improve patient safety and develop a culture of openness and transparency in the National Health Service.

“Under Secretary Hunt’s leadership – the NHS in England became the first healthcare system to report and publish the number of preventable deaths by individual hospitals on a quarterly basis – and then publish key learning and improvements made to eliminate preventable deaths on an annual basis. His work in implementing independent investigations of medical errors include elements of the CANDOR program as developed by the Agency for Healthcare Research & Quality (AHRQ) which has been proven to reduce serious patient safety events by about 65%.

“In 2017, Secretary Hunt championed a bill which for the first time, established a fully independent investigations body that seeks to find answers in the event of a medical error instead of laying blame.

We have approached the Royal College of Nursing and UNISON for comment.