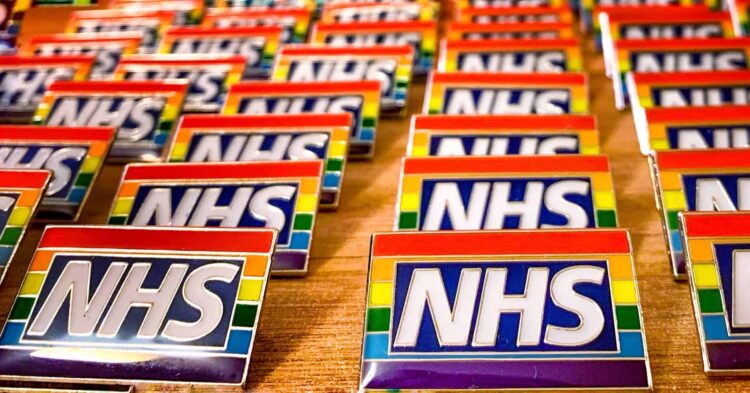 An online community of parents has branded NHS rainbow badges ‘divisive political symbols ‘ and has called for the NHS to remain non-partisan.

The NHS Rainbow Badge was introduced earlier this year in order to help address the challenges that LGBTQ+ people often face in accessing healthcare. The badges are optional to wear and show only that staff are sensitive to LGBTQ+ issues and are happy to discuss any concerns around sexuality.

Writing under the username ‘YesIWorkForTheNHS’ the initial poster sought advice explaining that while they ‘wanted to be inclusive’ they felt the rainbow badge did not represent their beliefs.

The post attracted more than 80 responses, while some were supportive of the message, the vast majority of members objecting to NHS trust issuing rainbow badges on the basis that hospitals should remain non-partisan.

Commenters repeatedly branded the NHS Rainbow badges a ‘political symbol’ and ‘oppressive’ to women and others pointed out that staff should treat everyone “fairly, with competence and compassion”.

However, one healthcare professional explained the importance of the pins; “By wearing it, two teens approached me with concerns that meant my care of them was more person-centred and orientated to their specific needs rather than catering to the masses,” they said. “I was glad that the symbolism attached to it encouraged them to speak to me directly.”

Another added; “I wear one because I want members of my team to know they can come to me about anything and I won’t judge and will try to help.”

While a Healthcare Support Worker added; “I don’t feel I need a badge or a patronising certificate to ‘prove’ that I can treat my patients as equals or to ‘show’ that I’m a friend to LGBTQ’s etc.”

Justine Roberts, Founder of the Mumsnet community, said; ‘Mumsnet is committed to freedom of speech, as long as comments don’t break our talk guidelines.

“The thread about the introduction of rainbow lanyards contains a mix of views from users including members of the LGBTQ+ community. Some are very supportive of the initiative, while others say that as professionals they treat all people with the same respect and level of care and don’t need a rainbow lanyard to do so.’

NHS England has called up student nurses to "step up...

Hancock and Johnson both report only having "mild symptoms".

Emergency NMC register goes live with over 7,000 nurses and midwives

Future plans include expanding the emergency register to include student...

Free parking should not be limited to NHS car parks...

PPE is either being strictly rationed or the correct protection...

Police appeal for information on a missing Healthcare Assistant

Front-line NHS workers ‘not being given appropriate PPE’, claims union