'It is more acceptable to smoke directly outside a hospital than it is outside a pub.' 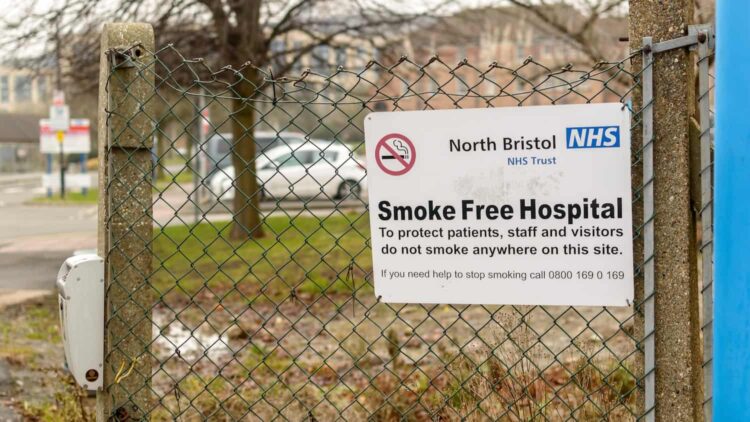 NHS Trusts have been repeatedly urged to become ‘smoke-free’ since 2013.

Public Health England has found that while NHS Trusts are making steady progress towards becoming smoke-free, nearly a third of trusts still permit smoking within their grounds.

A report by Public Health England (PHE) reveals that while smoking now banned completely on the grounds of more than two thirds (69%) of NHS acute Trusts in England, almost a third (31%) have not yet enforced total smoking bans across hospital premises.

It remains legal to smoke on hospital grounds in England. It is already outlawed in Northern Ireland and Scotland, and as from later this year, Wales.

Seema Kennedy, Public Health Minister said she is “determined to see a smoke-free NHS by 2020″.

Adding; No one should have to walk past a cloud of smoke in order to enter or leave their local hospital – we must lead by example.”

“Smoking is still one of the biggest causes of death in this country, and through our NHS Long Term Plan, every smoker admitted to hospital will now be offered targeted NHS support to quit. I am encouraged by this new survey, which shows great strides have already been made towards a smoke-free NHS – I strongly urge all Trusts to follow suit.”

Duncan Selbie, Chief Executive, Public Health England said: “One in four hospital beds are occupied by a smoker, and most of them want to quit.

“Many patients or visitors will be going through difficult times, but smoking remains England’s biggest preventable killer and it is time for the NHS to stop smoking within its hospital grounds, everywhere.

“It cannot be right that it is more acceptable in some hospitals to smoke at the front door than it is outside a pub.”