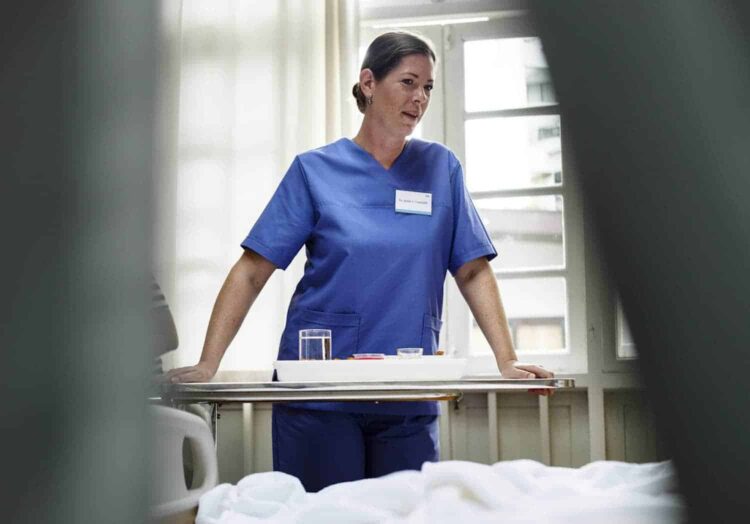 Healthcare assistants are being used to plug the shortfall in registered nurses.

Healthcare assistants now account for almost three in ten of all care roles in hospitals and their numbers are increasing at almost four times the rate of nurses, according to an analysis of NHS trusts.

The analysis by BPP University School of Nursing shows that 29% of all care roles are now filled by healthcare assistant.

For every nurse recruited in the past two years, NHS trusts hired on average 3.9 healthcare assistants.

The Royal College of Nursing said it was ‘worried’ about the future of the profession after figures show a consistent drop in nurse training numbers.

Demand on the NHS is rising.

Professor Lynne Gell, Dean of BPP University School of Nursing, said the figures showed that NHS trusts were having to think flexibly about their recruitment needs. “Maintaining the status quo is not an option. As demands for care rise inexorably and the supply of nurses struggles to keep pace with that demand, it’s inevitable that hospital trusts will look to other sources for their staffing requirements.

“HCAs are already a crucial element in care provision – and that role looks set to increase in the future.”

“There are 2,200 more emergency admissions per day than there were five years ago, 31% more diagnostic tests, while delays due to waiting for available home care have more than doubled in that time. We won’t solve our care staffing needs by standing still. We have to think more imaginatively about routes into health care and attracting and training more people.”

Professor Gell said clinical apprenticeships, although in their infancy, were a promising area for development and that BPP had seen increased interest in them from NHS trusts. She also pointed out that the NHS could do more to attract men into care roles.

“According to our analysis, men are almost twice as likely to become HCAs as they are nurses, while some trusts seem to be far better-attracting men into those roles than others. Clearly, if we could tempt as many men into nursing as there are in HCA roles, for instance, or if all trusts were equally successful at recruiting male carers, then we may go some way to meeting our staffing needs.”

Professor Gell also pointed out that it was important to take account of local differences: “We have seen particularly strong growth in HCA numbers in London, for instance, but historically their numbers have been proportionately low compared to those in the rest of the country. Similarly, nursing vacancies have not hit all areas equally. They may have soared in the North West but across country in the North East during the same period they actually fell.”