Nurses to hold UK Governments to account over homelessness

Everybody had a right to "have a roof over their head". 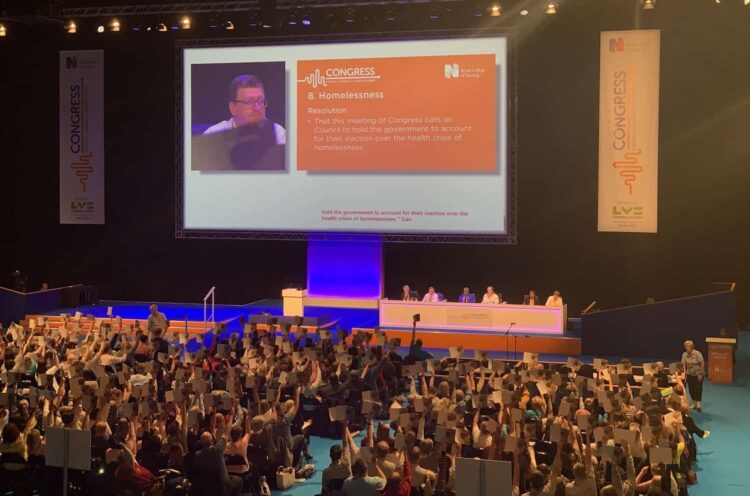 Royal College of Nursing members have voted to “hold the Government to account for their inaction over the health crisis of homelessness.”

Nurses voice their concerns today at the unions’ annual congress that homelessness is costing the health service billions by leaving people with respiratory problems, mental health issues or worse.

The Matter for Discussion, initially proposed by the RCN’s North Yorkshire Branch, changed to an emergency resolution amid fears that any delay in action would only lead to further harm.

Speakers said they felt the situation was continuing to worsen due to the Governments austerity measures and called for urgent action to be taken.

Maria Trewern, the former RCN Council Chair, proclaimed that everybody had a right to “have a roof over their head”.

We don’t always see the homeless.

Helen Donovan, the RCN’s Professional Lead for Public Health, said: “The public often think of homelessness as the problem of seeing people sleeping rough in the streets but we must be wary that we often can’t see most of the people who don’t have a proper home.

“People who are facing eviction, living in temporary accommodation or squatting have great difficulty accessing the healthcare they need for long term conditions or illnesses that onset quickly.

“I think one of the aspects that really frustrates nurses is the feeling that they’re discharging people back into the environment that’s caused their ill health and the feeling of powerlessness that comes with that. Nurses are often the first among frontline healthcare professionals to see the opportunity to break the cycle of admissions.

“They must be supported to pilot schemes that can make a meaningful difference to the health of homeless people or those at risk of homelessness.”

“We must look at a wholescale change to how we approach this emerging public health crisis by examining how we commission services to prevent homeless people becoming iller and iller.”