The documents cover six rounds of talks running from July 2017 until just a few months ago. 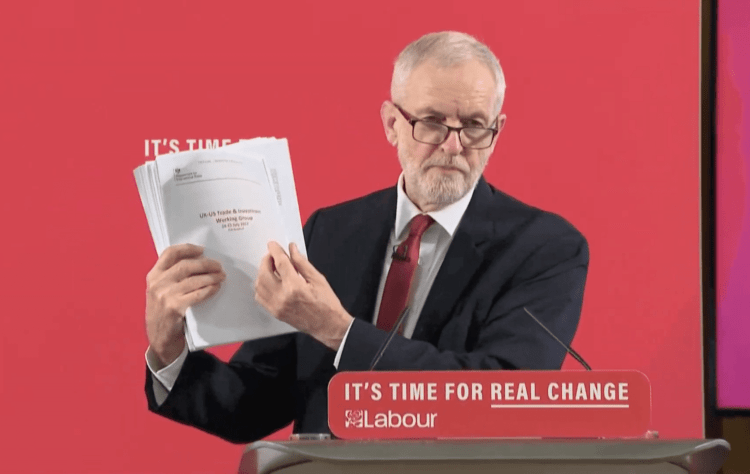 Previously redacted documents on a UK-US trade deal have been released.

The Labour Party says it has obtained 451 pages of previously redacted documents that confirm the NHS would be “on the table” in a UK-US trade deal.

In a press conference this morning, Labour leader Jeremy Corbyn published the unredacted documents and confirmed they show “the NHS is on the table and will be up for sale” in a UK-US trade deal.

He clarified that Government ministers sanctioned the talks, were aware of the talks, and they had previously refused to publish the documents under the freedom of information act request.

Copies of the documents were handed to journalists by NHS doctors and nurses in uniform.

The documents reportedly cover six rounds of ‘secret meetings’ running from July 2017 until just a few months ago, with meetings taking place in both Washington and London.

Inside the documents, UK officials report that “patent issues” around “NHS access to generic drugs will be a key consideration” in talks and that US officials have “pushed hard,” for longer patents on medication for US drug companies.

The US also agrees to share its “public lines” to help the UK government with its “media narratives”, going on later add that they advocate a ‘No Deal Brexit’ as it would mean there’d be “all to play for” in a deal.

Officials also say that “Total market access” is the “baseline assumption of the trade negotiations.”

The NHS must be protected.

Dame Donna Kinnair, RCN Chief Executive and General Secretary, said: “Nursing staff will be very concerned at any suggestion or evidence that a post-Brexit trade deal with the US could mean open season on NHS services.

“No matter how people voted in the EU referendum, no one wants the health service to be exposed to a carve-up to facilitate trade negotiations with another country.”

Dave Prentis, UNISON General Secretary, added: “The Tories have no scruples about letting US firms get their hands on the NHS.”

“It will be crippled by these greedy corporations and their overpriced wares. The cost of drugs alone will soar by hundreds of millions of pounds a week.

“The NHS is not for sale and must be protected. Any trade deal should not only exclude this beloved institution and other public services, but also prevent costly legal challenges in private investment courts.”