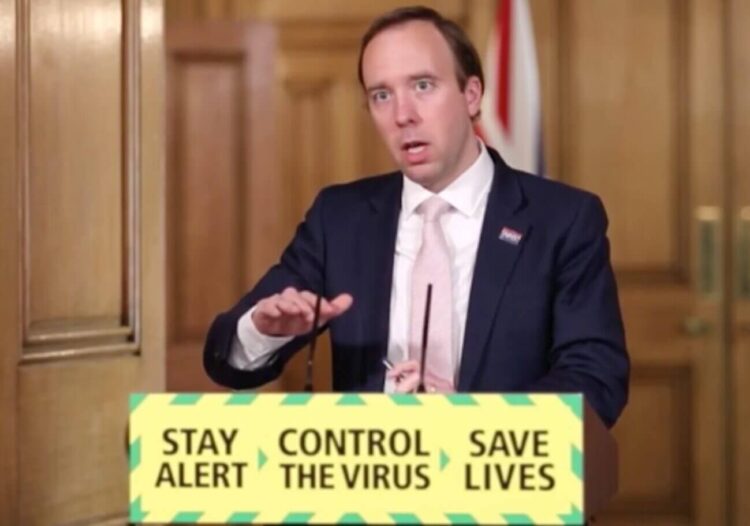 Matt Hancock has been accused of “criminal” behavior and misleading MPs and the public.

The Health Secretary told reporters yesterday that he was too busy “saving lives” to answer questions over allegations he lied to MPs and the public “15 to 20” times during the pandemic.

Mr. Hancock told reporters that he has instead “been dealing with getting the vaccination rollout going, especially to over-30s, and saving lives”.

Mr. Hancock was singled out during the testimony with Mr. Cummings claiming he should have been fired for “at least 15 to 20 things – including lying to everybody on multiple occasions”.

He was accused of “criminal” behavior and misleading MPs and the public over the safeguards and testing in place for care homes, the ordering and availability of personal protective equipment (PPE), and setting up the NHS test and trace system.

Notably, throughout the pandemic, Mr. Hancock was consistently adamant that staff had the protection they needed despite consistent that healthcare workers had inadequate or inappropriate PPE and even been provided with repurposed bin bags as aprons. Fourteen months later the Royal College of Nursing (RCN) is still calling for improved PPE.

Nurses took to Twitter after the high-profile meeting calling upon Mr. Hancock to resign or the PM to replace him as Health Secretary.

The Royal College of Nursing (RCN) alongside several other nursing leaders has called for an urgent public inquiry to take place.

RCN Chair of Council, Dave Dawes, responded to today’s meeting; “Failures in planning, decision-making and accountability left nursing staff dangerously short of the protection they needed from the very beginning of the pandemic. But even today, we are continuing our demands for increased protection for health care workers as new variants emerge.

“Hearing today’s proceedings will have been difficult for anyone who has lost a colleague, family member or friend to Covid-19. We believe the formal public inquiry should be expedited as a matter of urgency.”