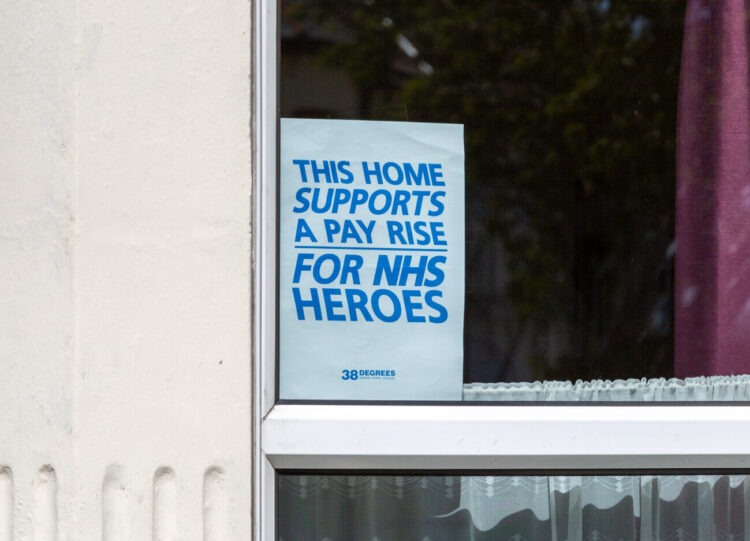 Health unions have been calling for a pay rise of between 12.5% and 15% since last year.

Two-thirds of the public believe NHS workers should get a rise of more than 1%, according to new polling data.

A survey of more than 2,000 people shows a majority of the public (60%) think the 1% rise proposed by the government for NHS workers in England is too low.

The research undertaken by Savanta ComRes on behalf of the UK’s 14 health unions, demonstrates that people want the Prime Minister to stand by his promises to NHS staff, they claim.

The findings also highlight how two-thirds of people (66%) would support the government making additional resources available for a pay rise for NHS staff.

Healthcare unions have been calling for an immediate pay rise of between 12.5% and 15% since last year.

The news comes as Scotland’s Healthcare workers consider a recent 4% pay offer on top of a £500 bonus for their hard work during the pandemic. Both the RCN and GMB are recommending their Scottish members reject this offer, while in stark contrast, Unison is suggesting they accept it warning that the alternative is prolonged industrial action.

The government has confirmed it will use the Pay Review Body process to determine a pay award for NHS staff in England this summer, but in March told the NHSPRB 1% was all it could afford.

Any pay offer will likely be backdated to April 2021 when they were originally due the rise.

There is increasing pressure on nursing unions to ballot their members on industrial action if a satisfactory deal cannot be reached.

RCN Acting Chief Executive & General Secretary Pat Cullen said: “This polling is more evidence of the strong public support for a decent pay rise for health and care staff who are still going over and above during this worldwide pandemic.

“If politicians ignore NHS workers and the public, it’s inevitable more nurses will leave the profession – with patients and the wider public suffering as a result.

“The public will hold the government to account for the failure to address the pay crisis and the tens of thousands of vacancies.”