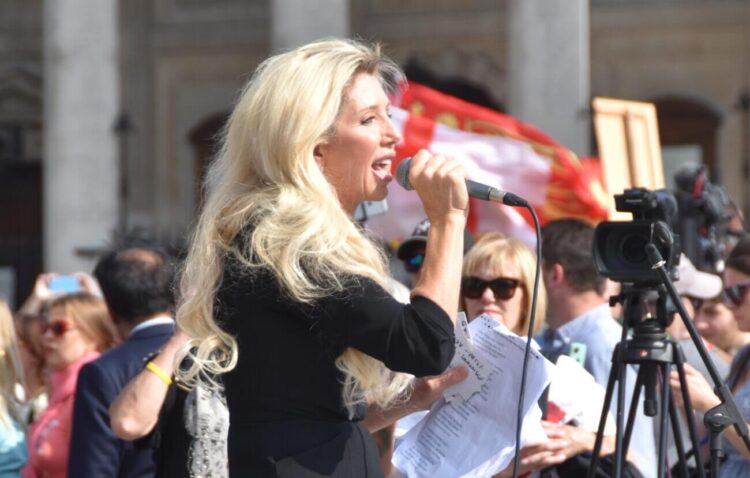 She developed a cult-like following over the past year due to her controversial views.

The Nursing and Midwifery Council (NMC) has made the decision to permanently remove a conspiracy theorist and anti-vaxxer Kate Shemirani from their register.

A registered nurse, non-medical prescriber and aesthetic practitioner at the time, Ms Shemirani developed a cult-like following over the past year due to her controversial views on vaccinations and lockdown.

She dubbed the current world health crisis a “scamdemic plandemic” in numerous YouTube videos before she was banned from the platform.

Ms Shemirani was originally suspended by the NMC in July 2020 in response to complaints that she was spreading misinformation about COVID-19 and about vaccines. During this hearing, which was uploaded to the internet, Ms Shermirani and her representative made several claims about the pandemic, 5G and Bill gates.

Following a subsequent hearing in May it was decided that Ms Shemirani would no longer be allowed to practice.

According to the most recent hearing documents she was charged with numerous violations of the NMC’s code of conduct which all nurses in the profession must uphold.

Ms Shemirani is noted to have not attended the hearing and not responded to the NMC’s request for any mitigating circumstances.

“The Registrant appears to genuinely believe that there currently is not a global pandemic, that the COVID-19 virus does not exist, that people are not dying from COVID-19 and that vaccines are unsafe and harmful to a person’s health,” the panel noted.

The panel added Ms Shemirani “used her professional status to promote and support her views, and to promote advice which is not based on the best available evidence both in respect of the management of Covid-19 and vaccines.”

The NMC justified the decision to remove Ms Shemirani registration showed “no insight, remorse or remediation”, abused a “position of trust” and has “conduct which put the public at risk of suffering serious harm”. Ms Shemirani will have 28 days to appeal the decision.