Nurses United led numerous demonstrations calling for PPE and a pay rise for NHS workers over the past few months. 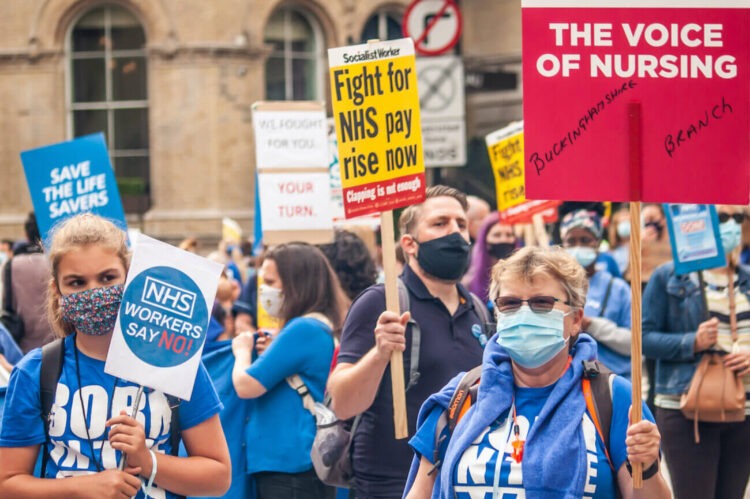 The union has been accused of trying to “divide” nurses during a time of difficulty for the profession.

The Royal College of Nursing‘s (RCN) ruling Council has made the controversial decision to prevent some senior members of the grassroots group Nurses United from holding key positions within the union.

RCN Council papers reveal that the union paid for legal advice last month and has since branded Nurses United an unregistered trade union – something the organisation denies.

Nurses United have led numerous demonstrations calling for personal protective equipment (PPE) and a pay rise for NHS workers over the past few months.

In a statement condemning the decision, Nurses United UK, said; “We were disappointed to learn this week that the Royal College of Nursing (RCN) has arbitrarily defined Nurses United as an “unregistered” trade union.

“This decision was taken to wrongfully disqualify RCN members on Nurses United’s leadership team from exercising their full rights to participate within their union.”

The organisation then goes on to accuse the RCN of attempting to “divide” nurses during a time of difficulty for the profession.

The statement continues; “This is why it saddens us at Nurses United to discover the RCN, with over £100 million in reserves and a surplus this year of £6 to £8 million, is willing to spend members money and countless hours of their time on legal fees to disenfranchise their members and member leaders.”

Frontline nurse Jemma James is currently standing for a position on the union’s ruling council but also holds an official position within Nurses United – her future within either organisation will now likely be called into question.

The Royal College of Nursing insists it is treating Nurses United like “similar bodies and trade unions.”

Dave Dawes, the Chair of RCN Council said: “Members of Nurses United can still get fully involved in the RCN’s work and hold governance positions.

“This change only affects people who hold official roles in Nurses United. This approach is consistent with restrictions placed on officers from other similar bodies and trade unions.

In apparent conflict with this decision, several senior members of the RCN hold prominent positions across the NHS, at Universities, and inside other nursing organisations.