Thousands of nurses sign an open letter to Matt Hancock

It is estimated over 3,000 nurses signed one of three six-foot letters. 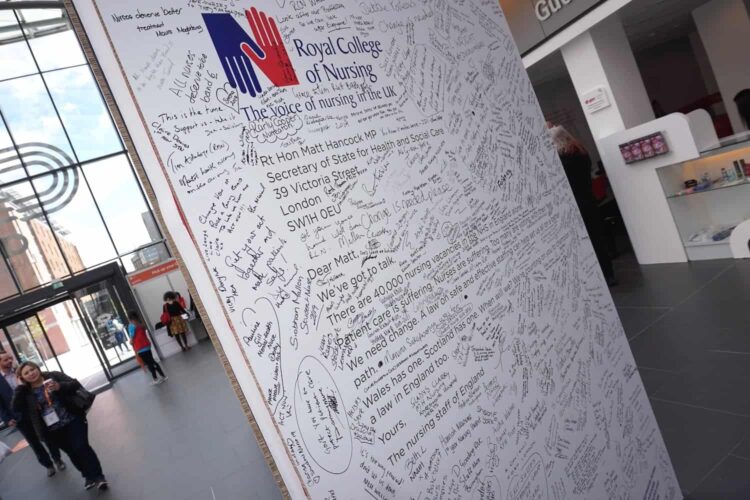 The letter called for a law on safe and effective staffing.

Earlier this week, thousands of Royal College of Nursing members signed an open letter to the Secretary of State for Health and Social Care.

The giant letter, which was available for delegates to sign last week at the unions’ annual Congress, called for England to mirror the actions of Wales and Scotland in introducing safe staffing legislation.

“There are 40,000 nursing vacancies in the NHS in England alone. Patient care is suffering. Nurses are suffering. Too many are voting with their feet.

“We need change. A law on safe and effective staffing can help set us all on a better path. Wales has one. Scotland has one. When will we? We are counting on you to champion a law in England too.

“Yours, the nursing staff of England.”

In November 2018, Matt Hancock said he would ‘consider’ safe staffing legislation in England but warned there could be ‘unintended’ consequences.

Both Wales and Scotland have introduced legislation designed to ensure safe and effective staffing throughout healthcare.

An RCN spokesperson said:  “Thousands of members signed a letter to  Matt Hancock, inviting him to talk to us anytime about why we really need a safe staffing law in England.

“So many people wanted to sign it, we had to get two extra sides to fit all the signatures. It’s a clear message that our door is always open – this problem needs urgent action.”

Although the union has not yet announced plans for the letter, members have called on the union to deliver the letter to Matt Hancock at the Department of Health and Social Care.