"We now have no alternative as a union but to trigger industrial action ballots", says GMB. 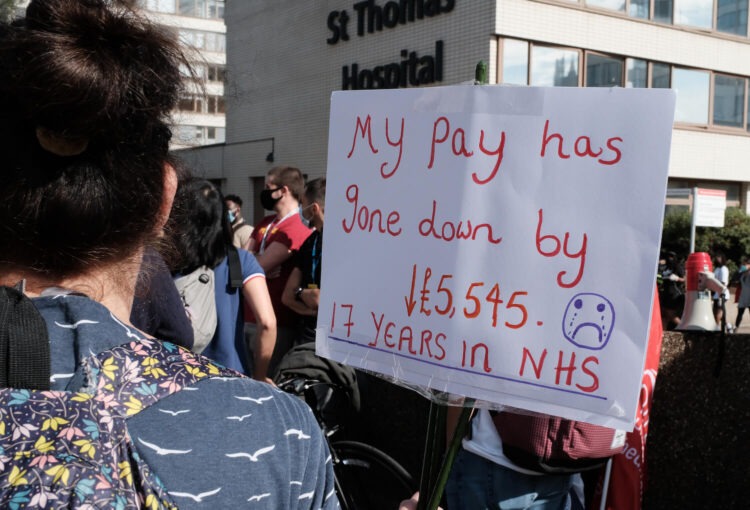 Experienced front-line nurses are around £6144 per year worse off now than ten years ago.

A healthcare union is to push ahead with a strike ballot after its member overwhelmingly rejected the recent 3% NHS pay award.

More than 9 out of 10 GMB members in the NHS rejected the single-year deal that saw the pay of NHS workers rise by 3% across the board.

An analysis by NursingNotes reveals that while 3% may sound significant, in real terms it would be a £547 real-terms due to a skyrocketing cost of living.

The union will now move to a strike ballot after 93% of members opposed the settlement and urges Health Secretary Sajid Javid to meet with NHS members to avoid industrial action.

Announcing the move wards strike action, Rachel Harrison, GMB National Officer, said; “GMB members across the NHS have overwhelmingly rejected the offer. We now have no alternative as a union but to trigger industrial action ballots.

“The result is no surprise – a 3% pay increase is an insult after ten years of pay cuts under the Conservatives. With inflation at 4.8%, this settlement amounts to yet another real terms pay cut.

“On top of that, GMB analysis shows the average NHS worker will pay more than £500 extra a year in increased National Insurance contributions.

“Our members are already working above and beyond their contracts and the NHS can’t continue to survive on this goodwill any longer.

“We are seeking urgent talks with the Health Secretary. He must meet NHS workers and  discuss how to recognise and reward the true value of what they are doing. Our health workers deserve a restorative 15% pay increase, not yet more salt in their wounds.”