Unions argue that as all health visitors have the same qualifications they should be paid the same. 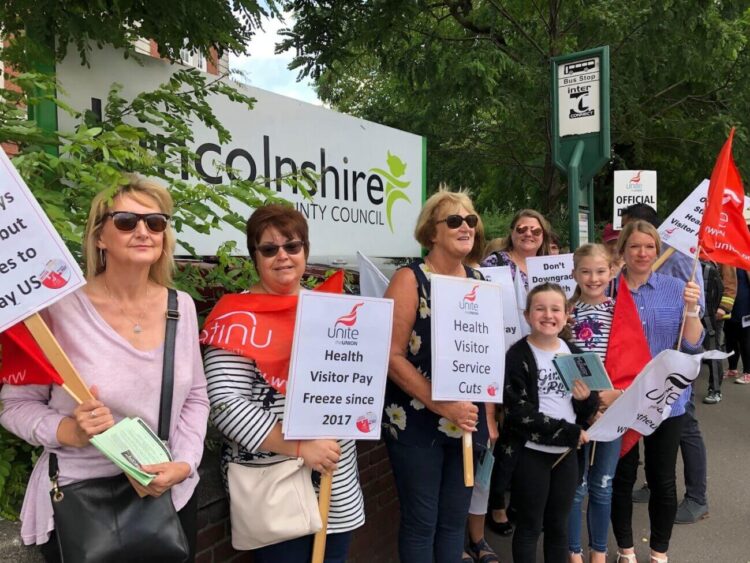 Lincolnshire’s health visitors will move up to a higher grade of pay.

Lincolnshire health visitors have suspended their month-long strike action after securing a pay victory over paygrade disparity across the county.

Unite released a statement on Thursday 5th December hailing the victory as ‘highly significant’ as it will see most of its members move up to a higher grade of pay.

The dispute started in the summer and had centered on the council’s insistence on different contracts for differing grades of health visitors.

Unite has consistently argued that as all health visitors have the same qualifications they should be paid the same.

A highly significant and welcome victory.

Unite regional officer Steve Syson said: “Thanks to the tremendous solidarity that our members have shown since this dispute started in the summer, we have achieved a highly significant and welcome victory.

“The health visitors’ determination against what they considered as a gross pay injustice was buttressed by the firm backing from the people of Lincolnshire and from supporters across the UK.”

More than 70 Unite health visitors voted for the month-long, now suspended, strike that started on 18 November. Roughly 58 will now be fast-tracked to the grade 10 posts with 16 further Agenda for Change (AfC) staff awaiting confirmation. 13 have left or taking up alternative employment within nursing, which leaves a handful of relatively new health visitors on grade 9.

Unite pledged today that it would explore every avenue to get those still on grade 9 uplifted to grade 10 as soon as possible.

The fight will continue.

Unite regional secretary for the East Midlands Paresh Patel added: “I think that a number of factors contributed to this positive outcome, including the fact that the council was, and even now, is continuing to lose highly skilled health visitors at the rate of knots, as our members are offered alternative roles elsewhere in recognition of their experience.

“There was also the stark realisation by council bosses that our members were prepared to take further strike action on top of what they had already taken in the summer, after a second ballot confirmed they were prepared to continue on with further industrial action.

“This victory should be seen in the context of a broader campaign for a fully-resourced health visiting service across England – that fight will continue across the country in 2020.”