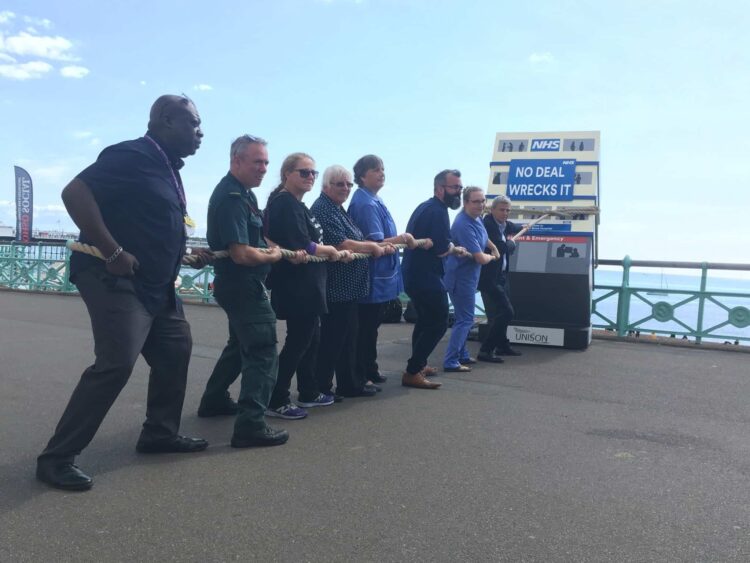 The “uncertainty and chaos” of a no-deal Brexit could push an already under pressure NHS over the edge.

Unison has warned that the “uncertainty and chaos” caused by a no-deal Brexit would put patients and staff at risk.

Following a joint statement from healthcare unions last week, the union echoed concerned about severe shortages of drugs and medical equipment as well as the possibility of cancelled operations and increased waiting times.

Speaking ahead of the opening of the 151st Trades Union Congress in Brighton, UNISON general secretary Dave Prentis said: “No responsible politician working for the good of the country would allow the NHS to plunge into the no-deal abyss. The Prime Minister must ditch his do-or-die bluster, respect the law by asking the EU for an extension and then let the country decide its future in a general election.

“The chaos and uncertainty a no-deal Brexit would bring could push an already under-pressure NHS over the edge. And patients will be the biggest losers.”

Dave Prentis was speaking as UNISON staged a stunt with health workers on Brighton seafront to highlight the risks to the NHS of a no-deal Brexit.

“Although the bill to prevent no deal passed another hurdle in the Lords last week, we’re not out of the woods. The threat remains when we’re up against a Prime Minister eager to break every convention, rule and promise in the book.

“A no deal risks severe shortages of drugs and vital medical equipment, with the potential for cancelled operations and appointments. Increased waiting times will further stretch public confidence in the NHS.

“No deal risks wrecking the fragile social care sector that’s reliant on EU nationals. If care collapses, A&E departments will be inundated and elderly patients won’t be able to leave hospital as they’ve nowhere to go.

“If freedom of movement ends, the staffing headache suffered by NHS trusts countrywide becomes a full-blown migraine attack. Many thousands of EU nationals have yet to apply for settled status and it’s anyone’s guess what that means for their jobs.

“The catalogue of logistical nightmares goes on. The NHS serves more than 140 million meals to patients every year, with much of the food imported from Europe.

“Possible fuel shortages could have a severe impact on 6,500 emergency ambulances and their crews operating countrywide, especially those in areas with lorries queuing out of the ports.

“But the real tragedy is that the millions spent on no-deal Brexit preparations could have been invested in rebuilding communities. Instead, real issues affecting people’s lives are being ignored – to the nation’s eternal shame.”