Figures suggest single parents will be the hardest hit, with the cost of running a household increasing by around £1465 per year. 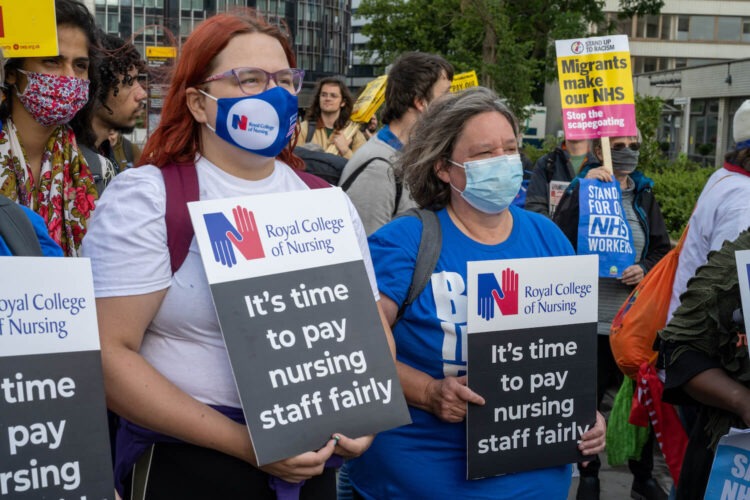 The most experienced front-line nurses are already around £6144 per year worse off now than ten years ago.

Despite a recent NHS pay award, nursing staff across the UK face a further real-terms pay cut as the cost of living continues to skyrocket.

Figures suggest single parents will be the hardest hit, with the cost of running a household increasing by around £1465 per year.

This includes an average rise in energy prices of £140 per year, an increase in national insurance contributions of £255 per year, and a record-breaking jump in inflation (RPI) means things like food and bills will cost an additional £1080 per year. NHS workers with the lowest income claiming Universal Credit will also face an additional cut of £20 per week.

Even when factoring in the recent 3% NHS pay award, the average frontline nurse will face a real-terms pay cut of £547 per year.

Leanne Patrick, a specialist nurse in violence against women, responded to the figures; “The cost of living is increasing for everyone. For nursing staff, the increase in NI, tax and other household outgoings will negate their already poor pay offer and represent a real-terms pay cut.

“This will disproportionately affect female and migrant nurses who typically earn less within the NHS and elsewhere. Women, for example, are more likely to work part-time, be single parents and pay more in childcare costs.”

The planned increase in taxation is a breach of the 2019 pre-election Conservative Party manifesto after it contained a personal “guarantee” from Boris Johnson not to raise income tax, VAT or national insurance.

Anthony Johnson, lead organiser for the grassroots group Nurses United added; “What a surprise that this Government, funded by those billionaires, is deciding to invest in more privatisation and is making frontline NHS workers and the rest of us pay for it?

“This is not a recipe for more staff, they need restorative pay rises to bring our NHS back to safety, not more pay cuts.”