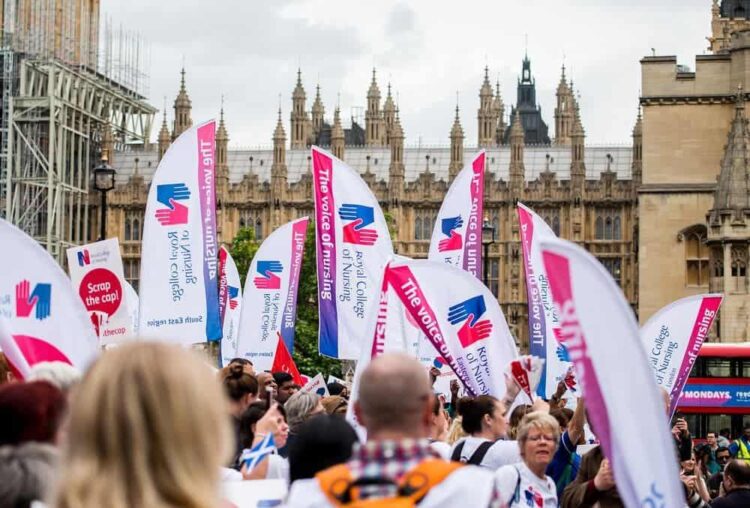 The UK could face countrywide industrial action by nursing staff.

The Royal College of Nursing (RCN) has announced it will ask nursing staff in England if they would be prepared to take industrial action through an indicative ballot.

It comes after the Government awarded NHS workers in England a 3% single-year pay rise earlier this year.

On a backdrop of increasing national insurance contributions, rising inflation and a skyrocketing cost of living many NHS workers will still find themselves worse off.

RCN Members working for the NHS in England, on Agenda for Change contracts, will be asked if they are willing to take action short of a strike (such as working their contracted hours only) or strike action (complete withdrawal of labour).

The decision follows a consultative ballot over the 3% pay award in which 92% of RCN members who voted made clear that the award for 2021-22 is unacceptable.

The news comes only days after a similar announcement was made in Scotland – meaning the UK could face countrywide industrial action by nursing staff.

A pay announcement in Northern Ireland is still awaited and nursing staff in Wales are still considering the next steps.

Announcing the ballot, Carol Popplestone, Chair of RCN Council, said: “Politicians might be hoping our members would go quiet about NHS pay but with this announcement they are turning up the volume yet further.

“We are a patient safety-critical profession, but currently forced to operate with tens of thousands of missing nurses – patient care is suffering.

Graham Revie, Chair of the RCN Trade Union Committee, added;  “Our members were very clear in telling the Prime Minster that his NHS pay deal was completely unacceptable – it fails the test of fairness and it fails to address the current crisis by not taking action to safely staff our wards and clinics.

“When the vote opens across England, the power is once again in the hands of nursing staff. I urge as many members as possible to speak up and tell us whether they believe industrial action is needed to turn things around for our patients.”