Other unions ‘disappointed’ with RCN over NHS pay position

While upset by the decision, the unions have committed to working along the RCN wherever possible. 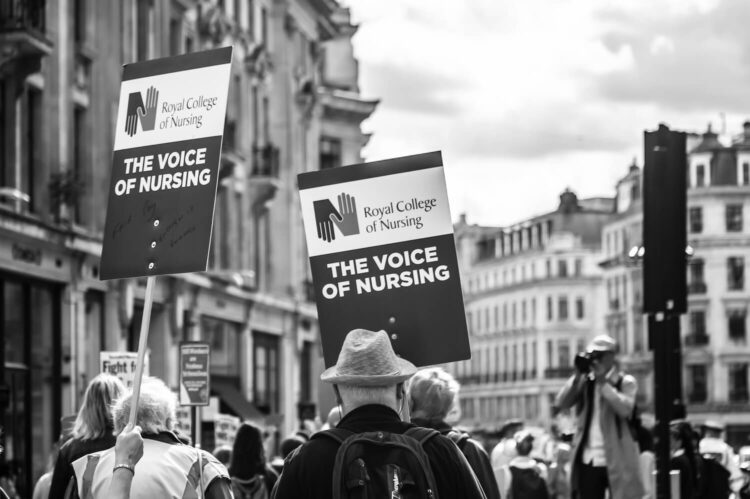 The decision to reject a collective stance has been met with mixed feelings from members.

Thirteen health unions have said they are “disappointed” after the Royal College of Nursing (RCN) rejected a collective stance on NHS pay.

Earlier this week, the RCN announced it would split from other unions by calling for a monumental 5% “above inflation” pay rise for NHS workers.

Reports from inside the union reveal the College’s ruling Council decided to deviate from a single NHS pay stance earlier this year when it ordered a plan developed and signed-off by the organisation’s elected Trade Union Committee (TUC) to be shelved.

Justifying the controversial decision to NursingNotes, an insider said that Council was keen to ensure the pay demand was clear to both members and the Government.

They explained that many felt an “above inflation” demand was not specific enough given the current economic situation and a decade of real-terms pay cuts.

Last month, the RCN accused the Government of trying to “pitch nurses against patients” by suggesting anything more significant than a 3% sub-inflation rise would negatively impact patients.

An ‘early and significant pay rise’.

Thirteen other health unions, including UNISON, Unite and GMB, have warned the decision prevents “one voice” on NHS pay and justified their decision not to commit to a fixed figure.

A joint statement from the other health unions reads, “The NHS unions are deeply disappointed that the RCN has taken the decision to back out of the collective position on NHS pay agreed by everyone in January and confirmed in a formal vote of the Staff Council staff side.

They explained; “It was a conscious decision of the joint unions not to put a number against an expected pay rise, Many unions had set figures last year when a negotiated approach was a real prospect and after months of government silence in response to calls to negotiate an ‘early and significant pay rise’ for health workers”

“Even in that relatively stable economic situation inflation jumped four percentage points between submitting evidence and receiving the eventual outcome. Given the current economic and political
volatility, unions considered it risky to set a rate when forecasts differ wildly about how high living costs will rise throughout the whole pay year.”

While upset by the decision, the unions have committed to working along the RCN wherever possible.

The decision has been met with mixed feelings from members.

Should the RCN have kept in line with other unions? Let us know in the comments.