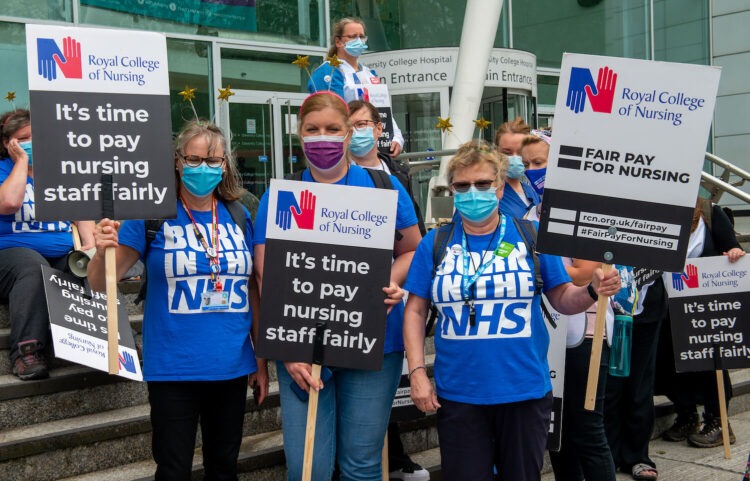 The Fair Pay for Nursing campaign is calling for a 12.5% rise for NHS workers across the board.

The Royal College of Nursing (RCN) is to consult its members over the recent “shambolic” 3% pay award.

Members in England and Wales will be asked to have their say on whether their 3% pay award is acceptable. The RCN consultation on NHS pay will open at 9am on 12 August and close at noon on 13 September.

It will be the first of three planned ballots which will ultimately culminate in a formal ballot on industrial action if RCN members reject the pay award.

In Scotland, members continue to be in a trade dispute with the Scottish government and NHS Scotland employers after they rejected an offer which gave them an average 4% pay increase on top of a £500 one-off payment earlier this year.  Ministers in Northern Ireland are yet to decide what they will award NHS staff.

The union has reminded members to ensure their details are up to date so they can be involved in the consultation.

The Fair Pay for Nursing campaign is calling for a 12.5% rise for NHS workers across the board.

Speaking following the pay annoucement RCN General Secretary & Chief Executive Pat Cullen said: “After a shambolic day, comes a shambolic announcement. When the Treasury expects inflation to be 3.7%, ministers are knowingly cutting pay for an experienced nurse by over £200 in real-terms.

“Hospitals and other parts of the NHS are struggling to recruit nurses and health care support workers. The government has been warned that many more are on the verge of leaving. With today’s decision, ministers have made it even harder to provide safe care to patients.

“This announcement is light on detail. It must be fully-funded with additional monies for the NHS and ringfenced for the workforce bill.

“Nursing staff will remain dignified in responding to what will be a bitter blow to many. But the profession will not take this lying down. We will be consulting our members on what action they would like to take next.”