Nurses in Northern Ireland are fighting for pay parity and improved patient safety. 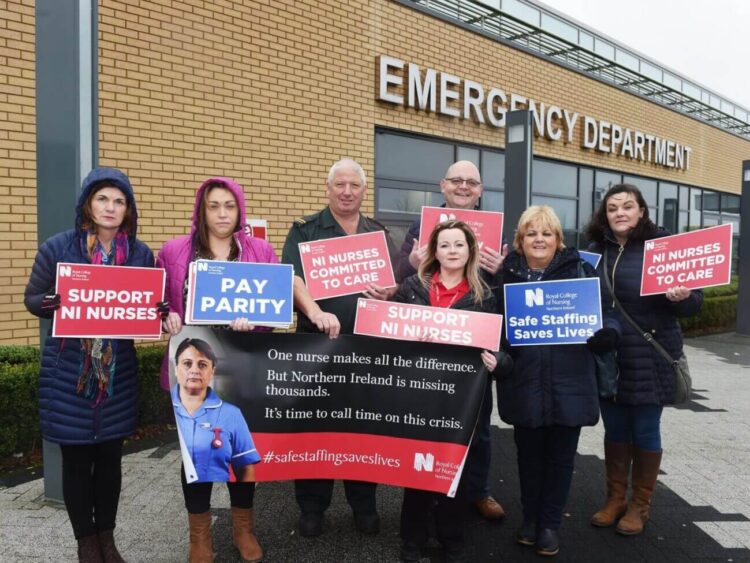 Nurses are fighting for pay parity and improved patient safety.

Thousands of nurses and allied healthcare professionals in Northern Ireland are fighting for pay parity with their counterparts throughout the UK and improved patient safety.

Members of the Royal College of Nursing (RCN) and Unison are now making their final preparations for a 12-hour full walkout from tomorrow, it follows days of ‘work-to-rule’ action earlier this month.

It will be the first time in the organisation’s 103-year history that it has backed industrial action.

Pay parity and patient safety are the focus of the strike.

A newly qualified nurse in Nothern Ireland is paid around £2000 a year less than their counterpart in England.

Unions are currently in the process of preparing picket lines after failing to negotiate a deal with the Department of Health.

In crisis and at breaking point.

Speaking exclusively to NursingNotes, Denise Kelly a nurse taking part in the strike said; This is being actioned with a very heavy heart. Patient care is paramount but we are in crisis and nurses are at breaking point, watching safe and effective care being compromised on a daily basis, especially at night time.

“Tears and heightened levels of stress and burn out are a daily occurrence and cannot continue. Nurses fear for their NMC pins.

“Nurses want to deliver high quality, safe, compassionate service but this is becoming increasingly challenging due to the increased pressures on the service and escalating vacancy rates. I fear for our profession and our patients’ futures.

“This impasse MUST be resolved now and focused strategic workforce planning with an enhanced block grant must be implemented immediately.

Not prepared to listen to the same excuses.

Director of the RCN in Northern Ireland Pat Cullen has previously said; “Nurses have made it clear that they expect pay parity with England and Wales, as well as concrete measures to address the nurse staffing crisis in Northern Ireland. These expectations are the basis of our industrial action.

“Despite the intervention of the Secretary of State for Northern Ireland, with whom the RCN met, it’s clear that Department of Health officials are still incapable of grasping either the severity of the crisis in our health service or the determination of nursing staff to secure safe staffing and pay equality.

“Nurses are no longer prepared to listen to the same excuses from the Department of Health about budgets and/or not having the ministerial authority to deliver an acceptable pay award even if the money were available.

“Our health service is collapsing as we speak. It is simply not good enough for civil servants to continue to play with words and fail to take effective action to resolve this crisis. The RCN believes the gap between what the department is offering and what nurses expect in terms of pay parity can be achieved.