Thousands of nurses to protest about pay this weekend 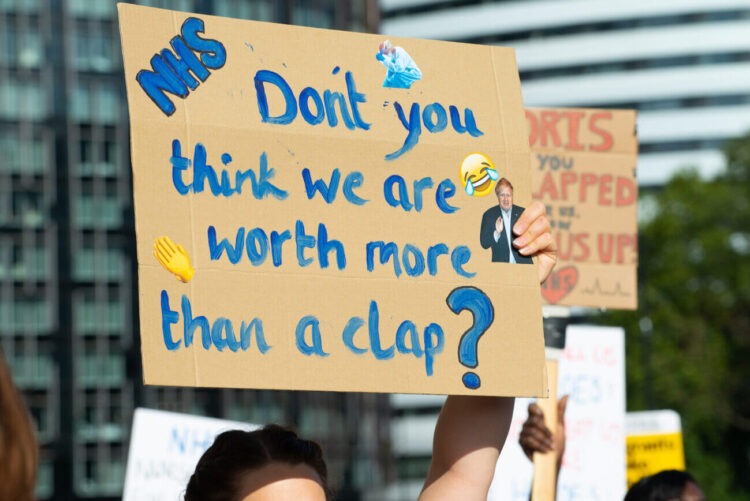 The most experienced NHS nurses are £6144 per year worse off.

Thousands of nurses and allied healthcare workers are expected to join protests across the UK on Saturday calling for fair pay.

New research by the Royal College of Nursing (RCN) suggests that over a third of the nursing workforce is considering leaving due to poor pay and working conditions and in July thirteen healthcare unions called for “immediate pay discussions” to begin suggesting that “applause and kind words” need to be turned into something more substantial.

A recent survey by UNISON found that the majority of the public (69%) believe all NHS staff should get an early pay rise before the end of this year.

The RCN, Unite, and GMB are expected to support the protests while UNISON has told members they won’t be attending due to concerns over social distancing.

Pay has been driven down.

Nurses United UK is calling for a massive 10% pay rise for all health and social care workers, and while the RCN won’t publically commit to a number they are looking to ensure any new pay deal is simple, fully-funded and consolidated.

Rachel Harrison, GMB National Officer, the only union to reject a previous pay deal commented on the protests, saying;  “Nurses have long endured their pay, terms and conditions being driven down for years.

“Many dedicated staff have left the NHS because they can no longer cope with the low pay combined with crippling workloads – this has plunged our health service into a recruitment crisis.

“Nurses are highly trained professionals and increasingly their pay fails to reflect this. Many thought this Government would play fair and compensate them for the risks and hard work they endured during the height of the pandemic.

“Instead they feel that they have been kicked in the teeth. If billionaires like Richard Branson can be bailed out by the Government, why can’t money be spent on giving NHS workers a proper pay rise?

“GMB Union is calling on Ministers to do the right thing. We won’t stop organising and campaigning until they do.”