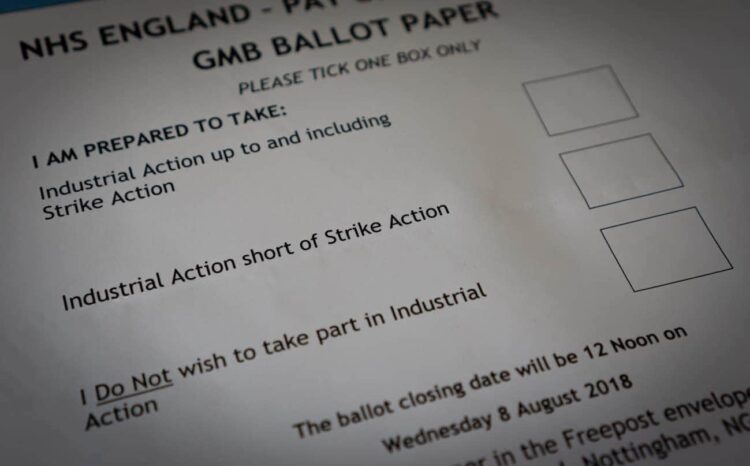 A healthcare union is asking its members if they are prepared to take strike action over the NHS pay deal.

The GMB was the only healthcare union to recommend its members rejected the proposed deal in and June announced that a massive 87% of NHS members voted against the NHS pay deal.

The deal is a further real-terms pay cut.

In a stark warning to its member, the union has calculated that under the new deal a staff nurse at the top of their band would see a further real terms pay cut of £1,773 over the course of three years.

Under the Government’s pay offer, the 40 percent of NHS staff in England at the top of their pay bands will see their wages increase by 6.5 percent over three years, well below projected inflation rates.

The GMB has said that a formal ballot could be issued if it has the support of its members.

Jeremy Hunt can’t pull the wool over eye ours.

Rachel Harrison, GMB National Officer for the NHS, previously said about the pay deal; “Jeremy Hunt has some cheek imposing a real terms pay cut of thousands of pounds on hard-working NHS staff.

“After nearly a decade of wage freezes and caps that has seen our dedicated NHS and ambulance workers’ pay pinched, our members have delivered an overwhelming verdict. It’s a no from us.

“If Jeremy Hunt thinks he can pull the wool over our members’ eyes, he’s got another think coming.”

After publishing its report last week, the NHS Pay Review Body has warned that “there is a workforce gap which is creating an unsustainably high level of vacancies, work pressures and potential risks to patient care.”